On the 16th of January 2020, the Israeli Defense Force / Air Force (IAF) 116 squadron became the second squadron to operate the Lockheed – Martin F-35A Lightning II, given the name "Adir" (Mighty, Great) by the IAF. The 116 squadron has its origins in the 1956 Suez War, flying surplus P-51D Mustangs in the ground attack roll and leading the offensive by cutting the Egyptian telephone wire communication lines with their propellers. With the end of hostilities, the squadron absorbed reserve pilots and Harvard trainers of the 140 squadron until it was closed on the 15 of January 1961.

On the 18th of February 1971, the 116 squadron relinquished their Mystere IVs for ex-USN A-4E Skyhawks, and operated them through the War of Attrition and the Yom Kippur War, after which it replaced the A-4E with more advanced A-4N version of the Skyhawk.

In October 1983 it became the first squadron to operate of the new built Negev desert airbase of Nevatim and in 2002 ended Skyhawk operations to receive second hand General Dynamics F-16A/B Netz aircraft which she operated till the summer of 2015.

In November 2019 the 116 squadron received their first pair of F-35A "Adir" aircraft directly from Lockheed – Martin, which were marked with the tail numbers 930 and 932. 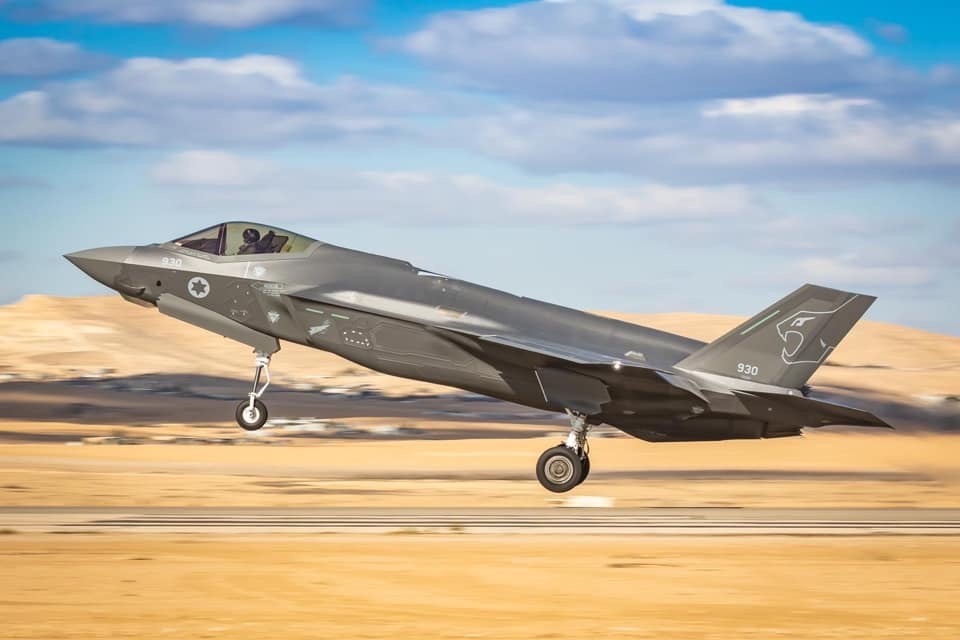 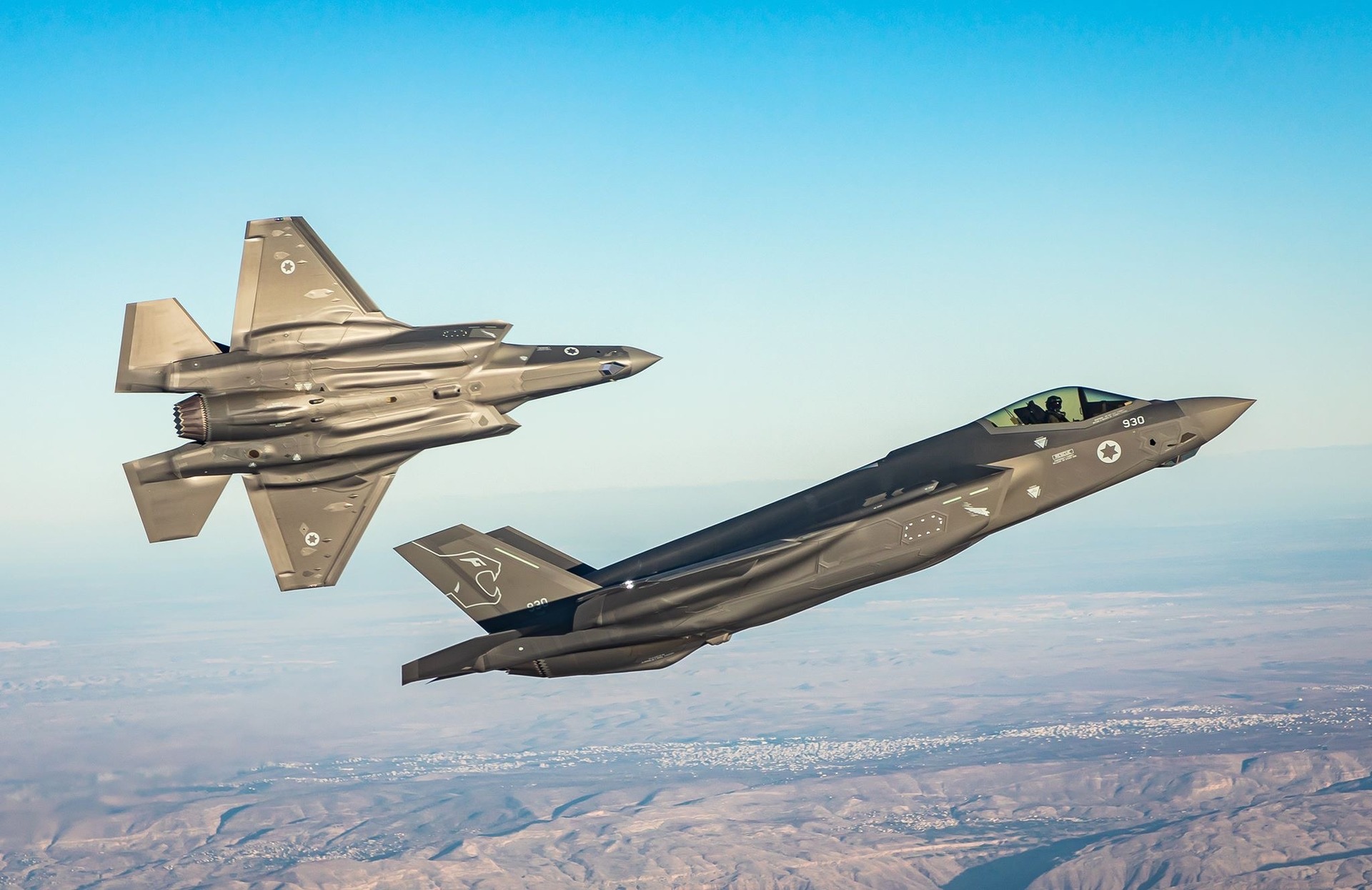 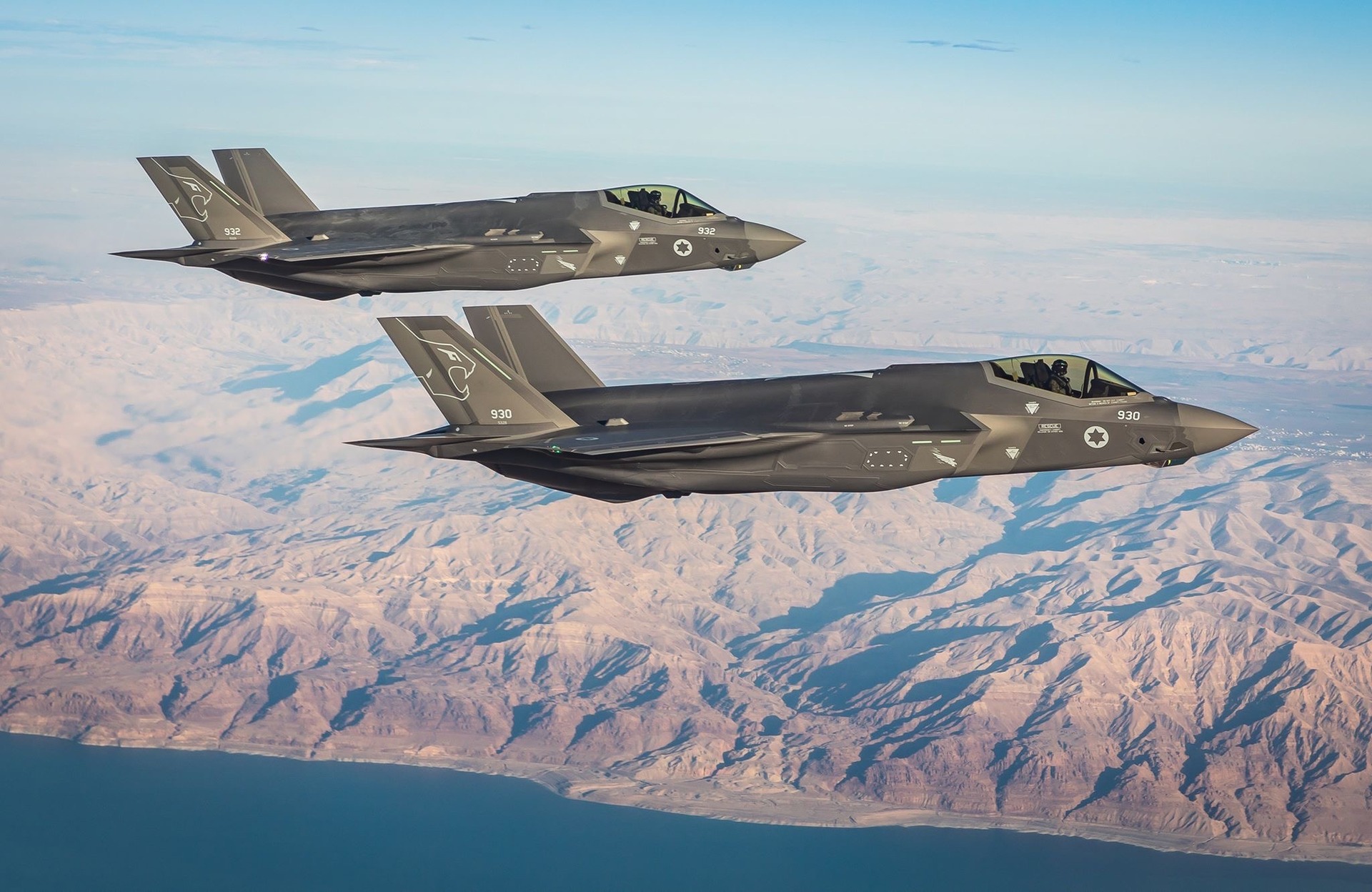 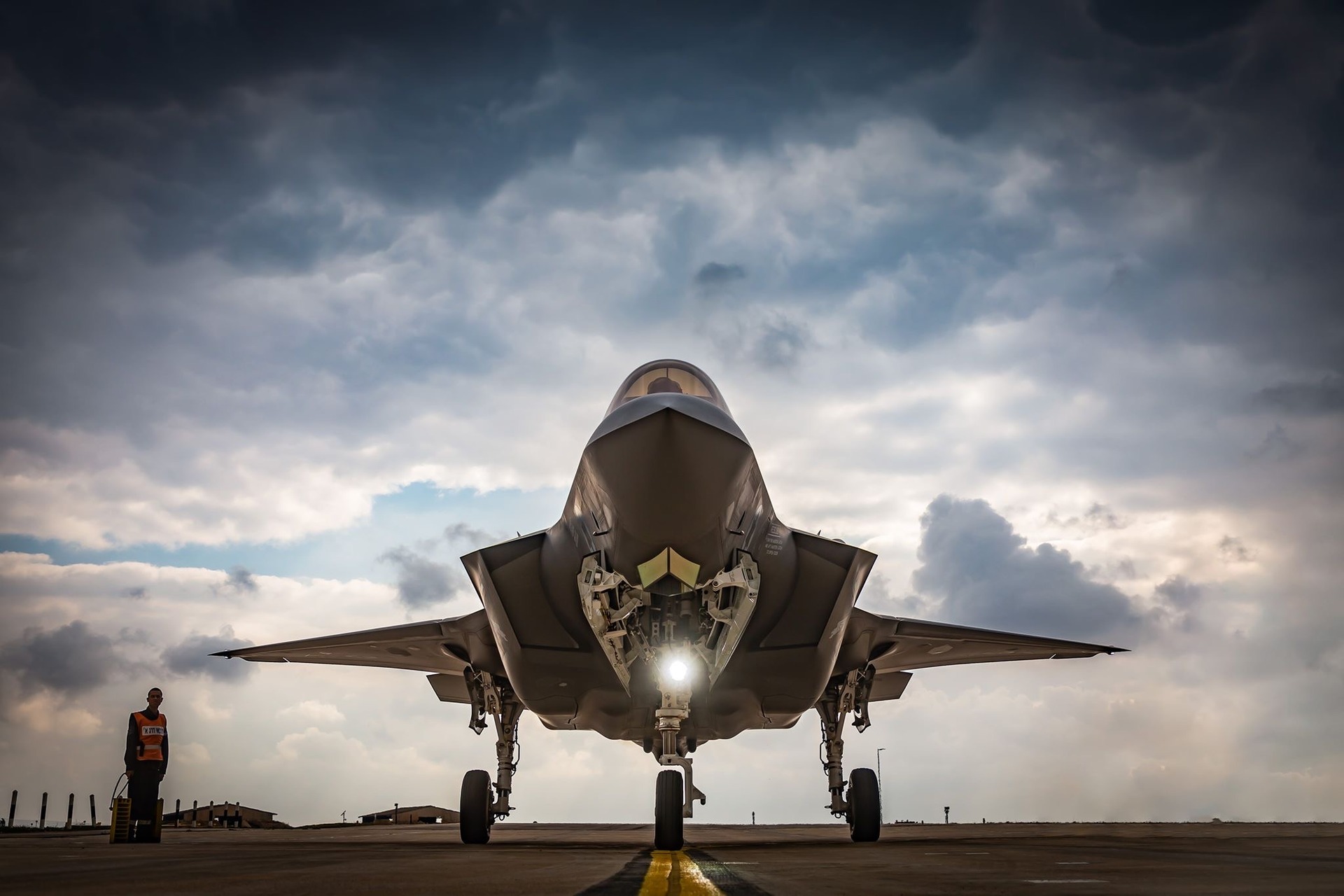 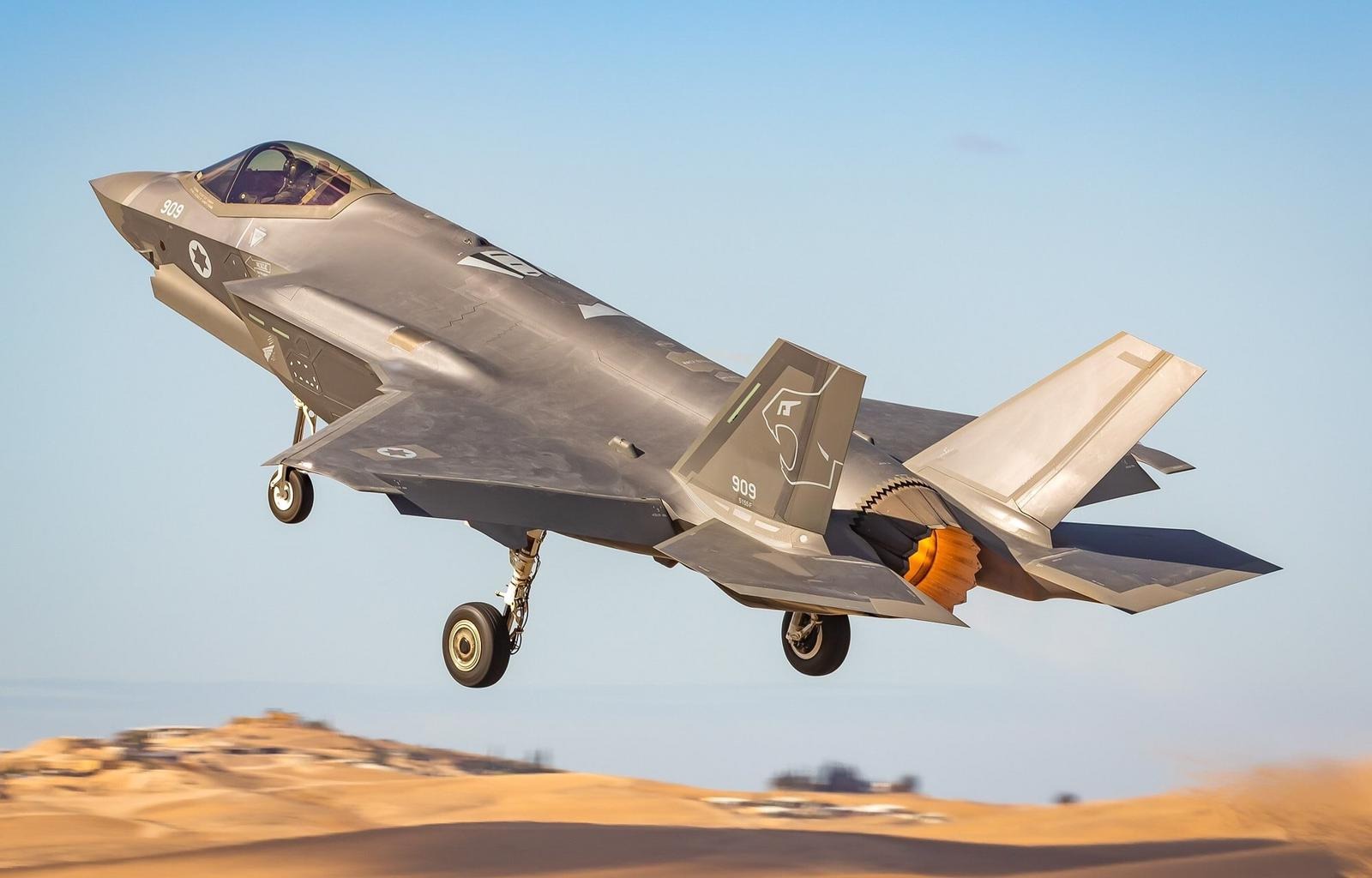 Academy's F-35A "7 Nations Air Force" kit release is a reissue of their 2013 kit #12507. The reissued kit has a dark silhouette F-35A Lightning II taking off on a striking yellow-orange backdrop. The kit is labeled with an MCP (Multi-Color Plastic) logo, yet except for the clear canopy, and forward down looking sensors "greenhouse", all the parts in my kit were molded in medium grey plastic. My kit contained six medium-grey parts trees of delicate recessed panel line detail and one clear parts tree with a one-piece canopy and lower nose optical sensor. All the zigzag RAM panel separation lines are flush with the fuselage surface where the wings and fuselage are molded in one piece. Highly detailed external stores provided in the kit include: a pair of AIM-9X missiles and wingtip pylon-rails, a pair of AIM-120C short fin AMRAAMs, a pair of GBU-31 JDAMs and four GBU-38 JDAMs mounted on external wing pylons. This reissued kit comes with a large decal sheet that provides all the RAM (Radar Absorbent Material) zig-zag panel tape, along with markings for USAF, South Korean, Australian, Italian, Netherlands, Royal Norwegian, and Israeli Air Force aircraft. Since this article is about building an Israeli Adir, I'll concentrate on the IAF marking option provided.

The IAF markings are limited to Adir number 901 as it appeared during its arrival on 12 December of 2016. The Israeli markings do not include current 140sq "Golden Eagles" and 116sq "Southern Lions" squadron insignia, nor the correct diameter Star of David applied to the nose of the operational Adir. The contrasting RAM panel decals are applicable only to 2016 – 2019 early IAF tail number Adirs. As of the year 2020, the zigzag access panel RAM tape is of the same color as applied to the fuselage.

The first chaise one needs to take when building this kit is opting for the display configuration desired. I opted for a lowered landing gear and open bomb bay configuration. The optional, open door configuration parts had ejection pin recesses on their internal surfaces which had to be filled. I used Deluxe Perfect Plastic Putty which can be leveled to surrounding surfaces using a wet cotton swab, after drying.

Prior to part assembly, enamel based Revell SM301 white was sprayed to the interior surfaces of the assembled bomb and wheel bays, landing gears and hubs, doors and intake ducts and exhaust nozzle. Details were enhanced with a very thin alcohol wash of acrylic based Tamiya X1 gloss white. Excess black was removed using a cotton swab dipped in alcohol.

Step 1 – Main landing gear forward doors B8 and B9 were cemented in the closed position prior to cementing the pre-painted bomb bay C1 and wheel bays C18 & C19. As usually seen when the airplane is on the ground. Locating holes for IFF transponders A4 were drilled out and both added at this stage of assembly. To aid in locating the GBU-31 bombs at final assembly, brass wire pins were inserted into holes make in the kit provided locating stubs.

Please note: at this stage, dry fit the main landing gear struts to the wheel bay slots, the lower fuselage wheel bay triangular aft end may interfere with the position of the main landing gear struts, it did on my model. You may need to position parts C18 and C19 approximately one millimetre forward in order to eliminate this interference. This is easily done by trimming off the forward flange of each part. I found this problem only at final assembly and I would advise on correcting it at this early stage.

Step 2 – shows the attachment of the fuselage ramp intakes B14 to the forward fuselage. For a flush fit, the intake-fuselage butt joint was backed from the inside using sheet plastic.

Note that its possible to retain the parts tree surrounding the nose tip in order to protect its sharp tip.

The forward wheel well C2 fitted in place and size #4 split shot led fishing weights were cemented aft and ahead of the nose wheel well. Intake ducts C20 and C21 have recessed ejector pin scars which had to be sanded smooth prior to being painted white. They were cemented in place after the intake lips and conformal fuselage intake rams were painted Revell 47 grey.

Step 3 – is devoted to the cockpit assembly; vent D4 was added to the cockpit prior to painting it and the upper fuselage cockpit side walls were painted Revell 374 (RAL 7001) grey. Joystick 13 and throttle 14 were left off to avoid inadvertent breakage. The upper and lower fuselage halves were cemented together and the sharp but brittle nose was protected with taped over sponge.

The ejection seat is well detailed and is made up of 8 parts; the only items added were seat belts fabricated from strips of Tamiya Tape fixed in place with cyanoacrylate cement applied with a wooden toothpick. 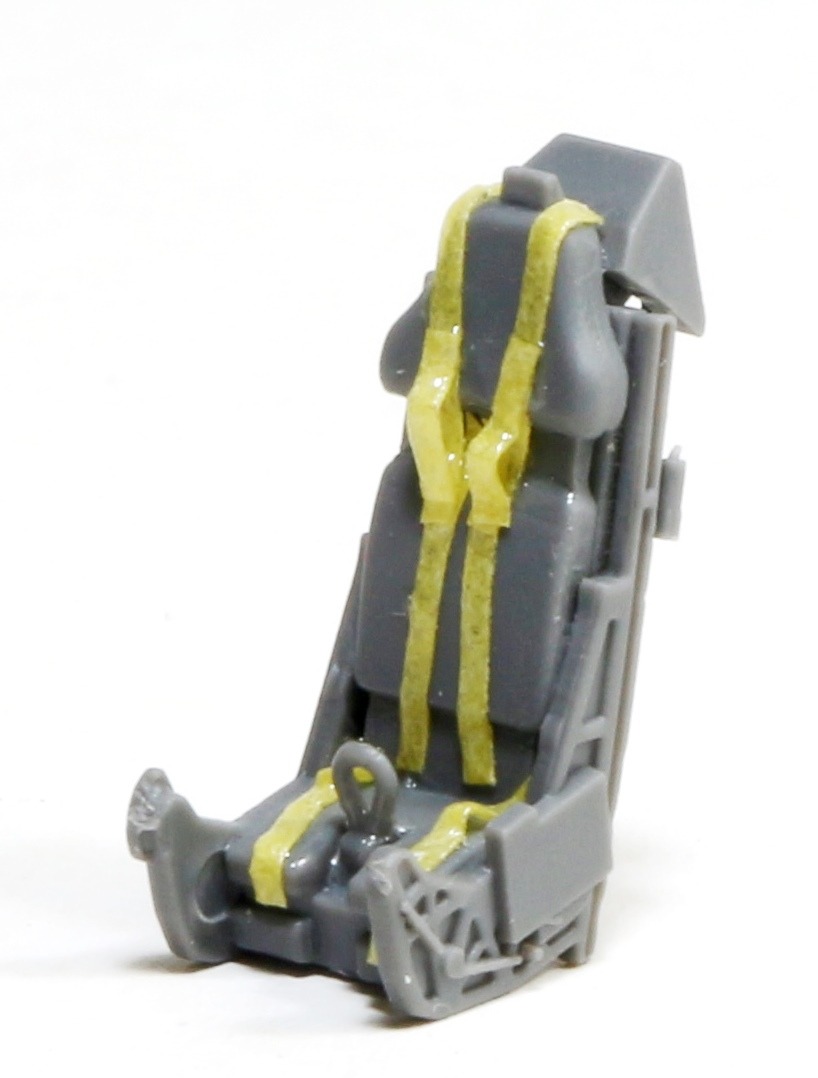 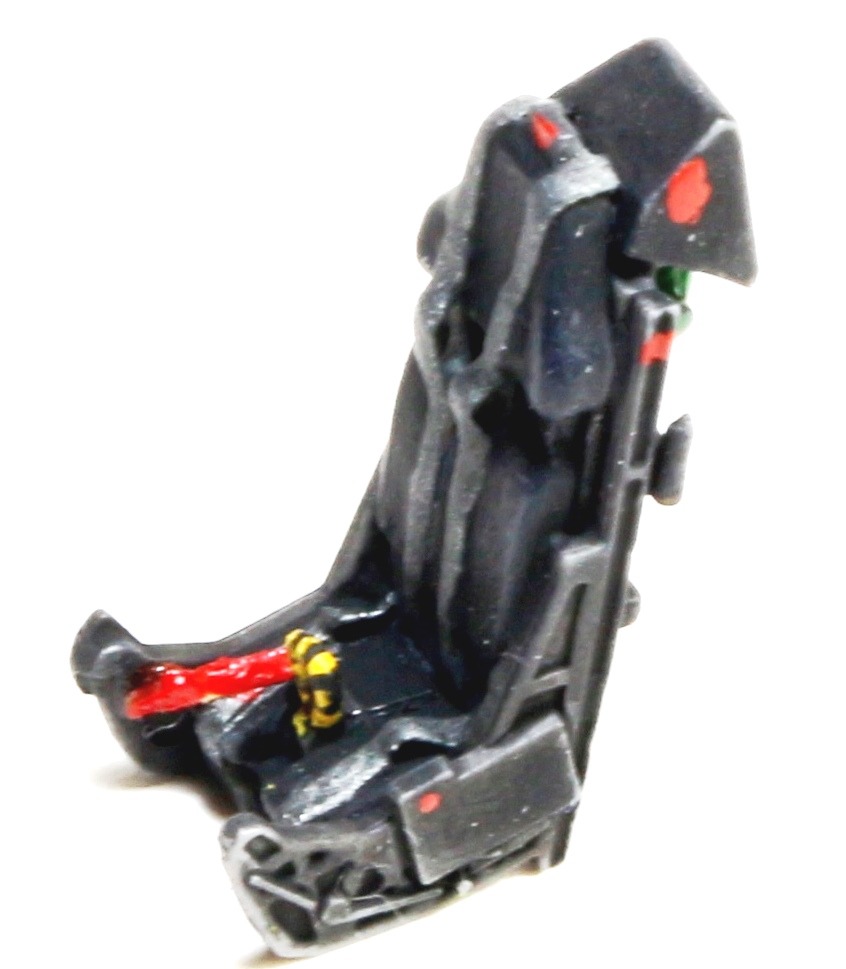 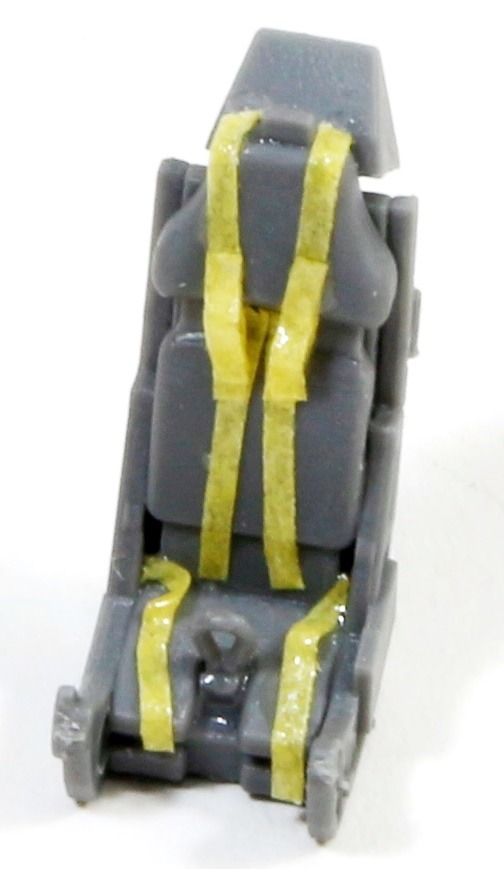 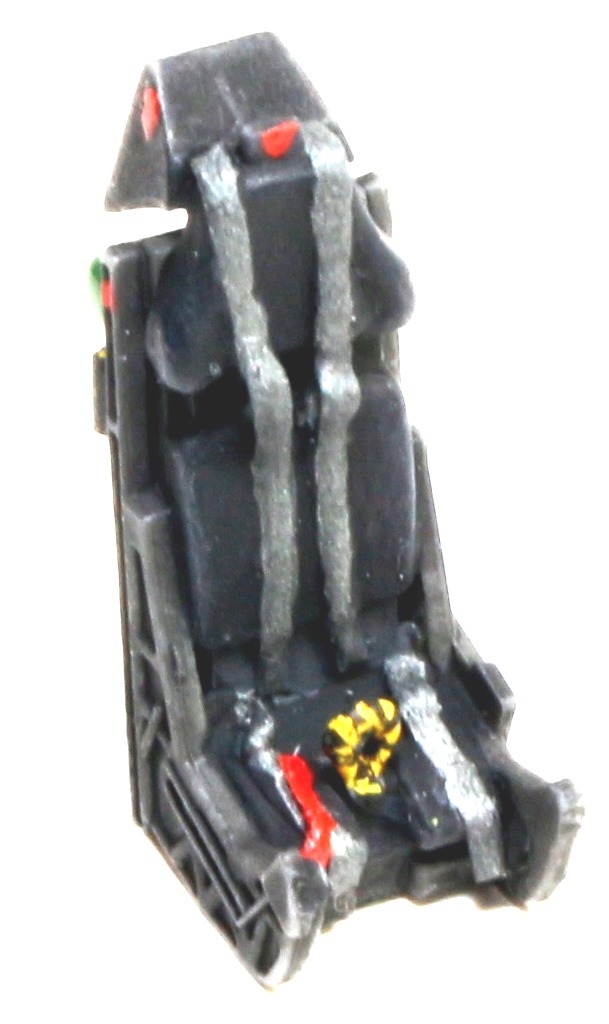 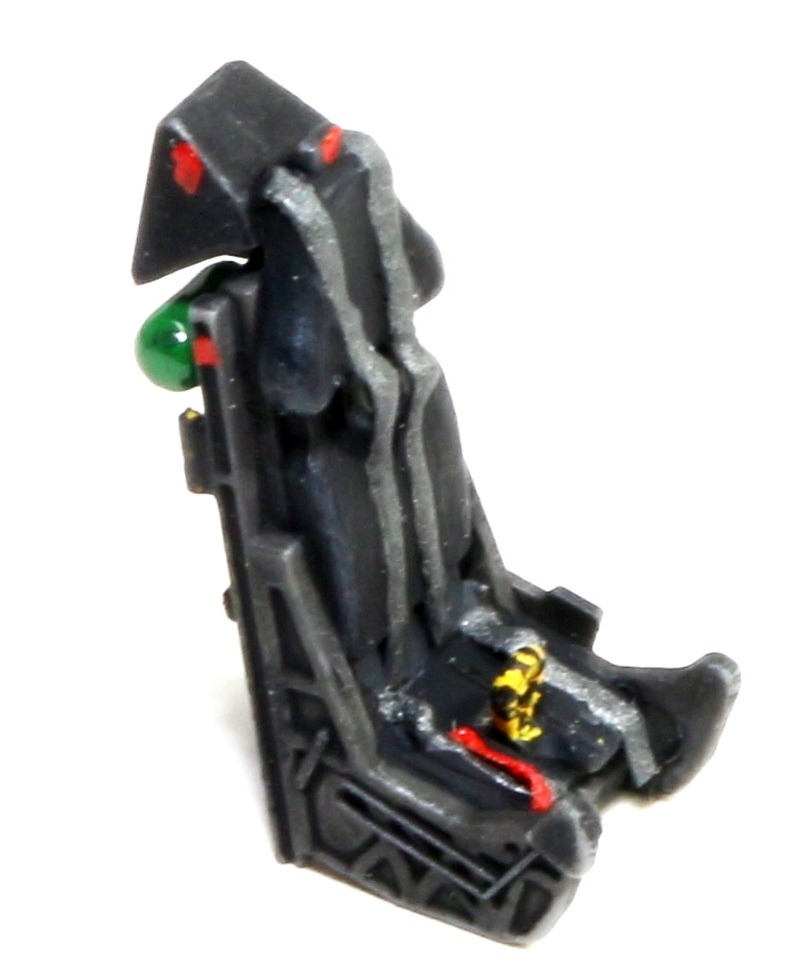 Step 6 - Opting for the "Beast Mode" configuration, I joined the four GBU-38 bombs to the pylons using brass wire inserted into #76 drilled holes.

Step 11 - A mixture of Tamiya X-24 clear yellow, Future Klear and alcohol were brushed inside and outside of the canopy to give it a golden tint. The inner crossbow was painted from the inside Tamiya XF – 1 Flat Black. The canopy exterior was masked with Tamiya Tape and liquid mask and sprayed Revell 47 grey.

With bomb bays, wheel wells and cockpit masked, the model was sprayed Revell 47 grey. Using photos of Adir 930, the various RAM areas were masked with strips of Tamiya Tape and the entire model painted Humbrol 79 (RAL7012) Grey. The amount of contrasting grey RAM areas is a lot less than on early F-35A airframes, so there was no need for the use of the kit to provide RAM decals. The landing gear and bomb bay doors were also sprayed Humbrol 79. 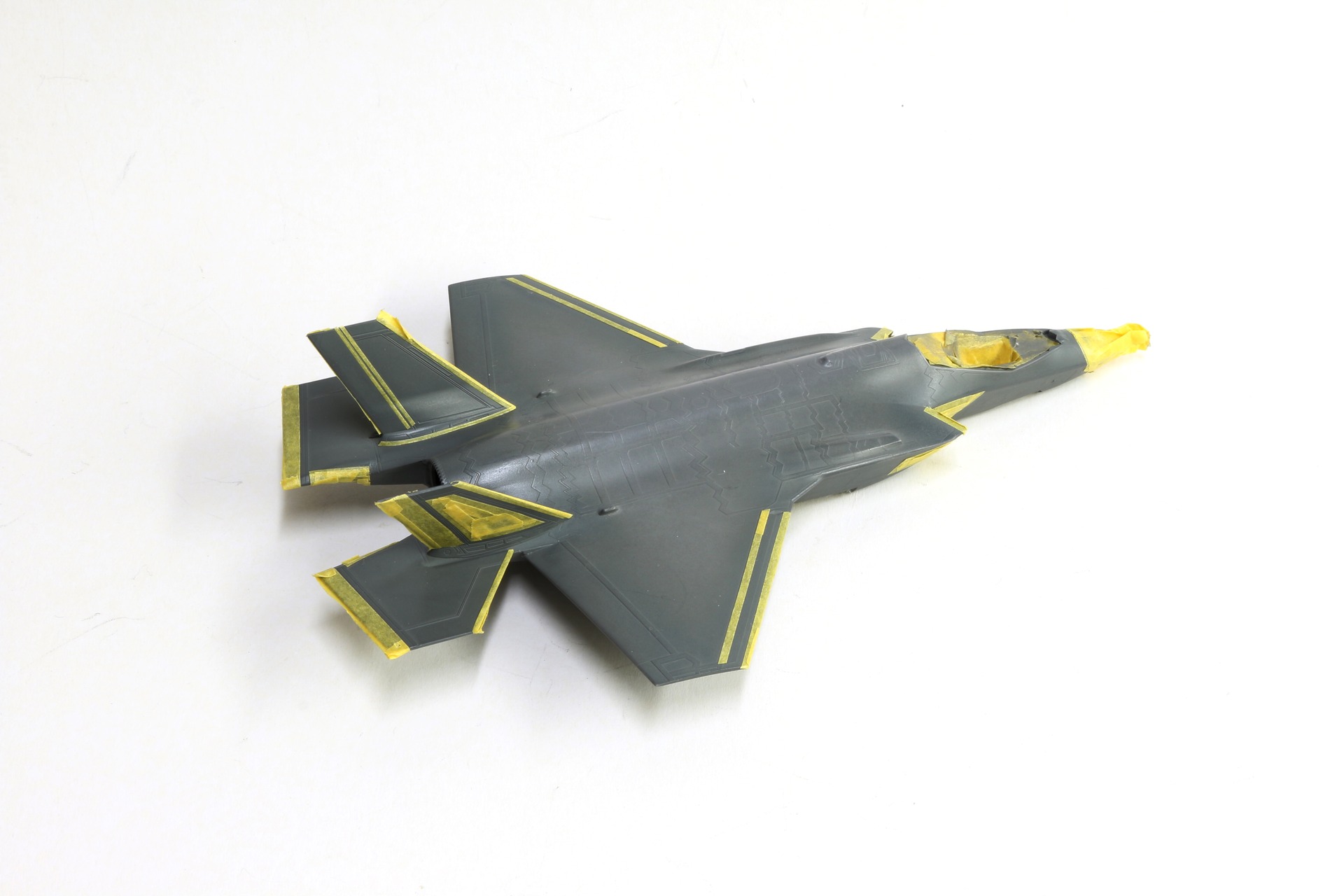 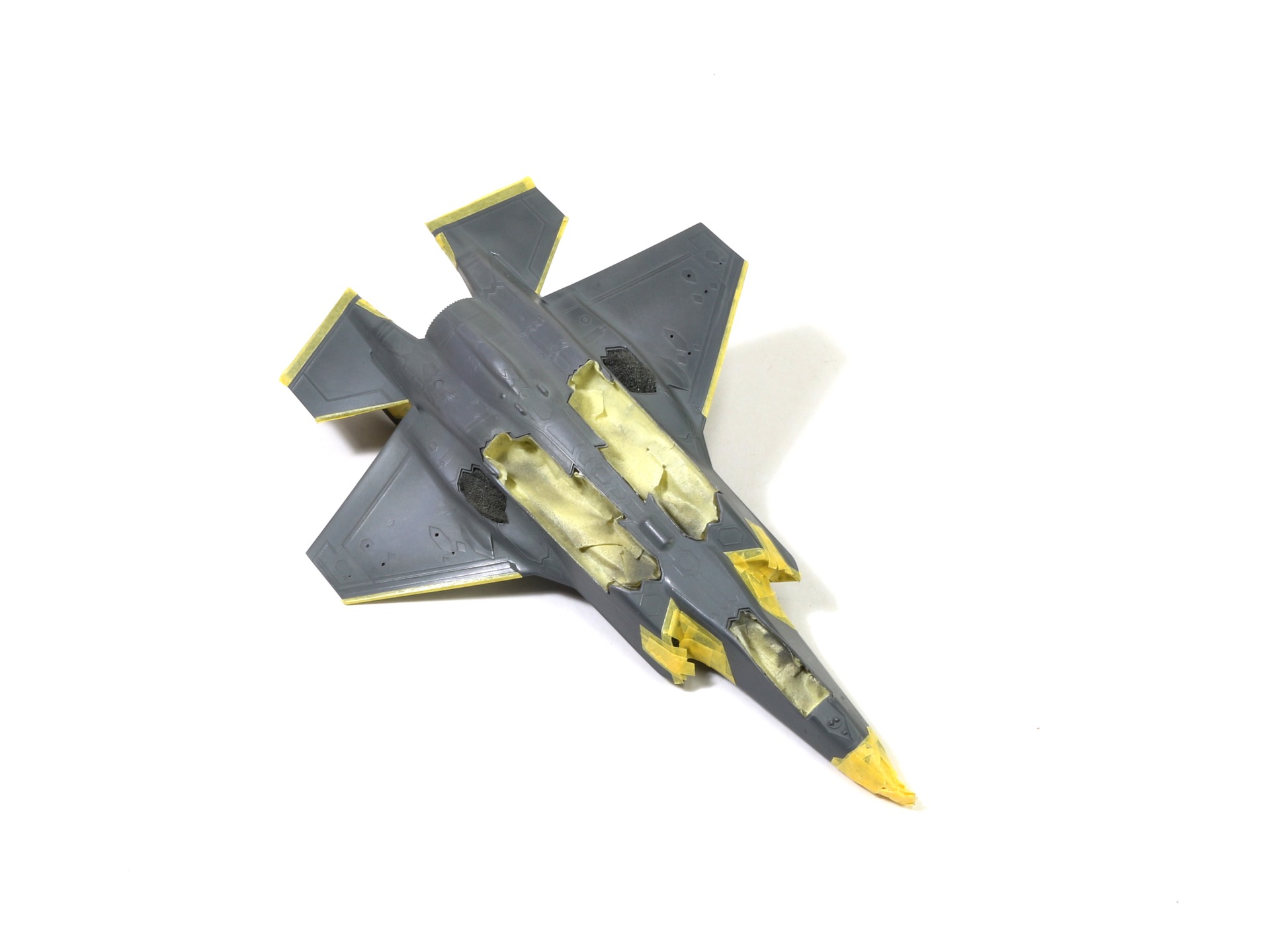 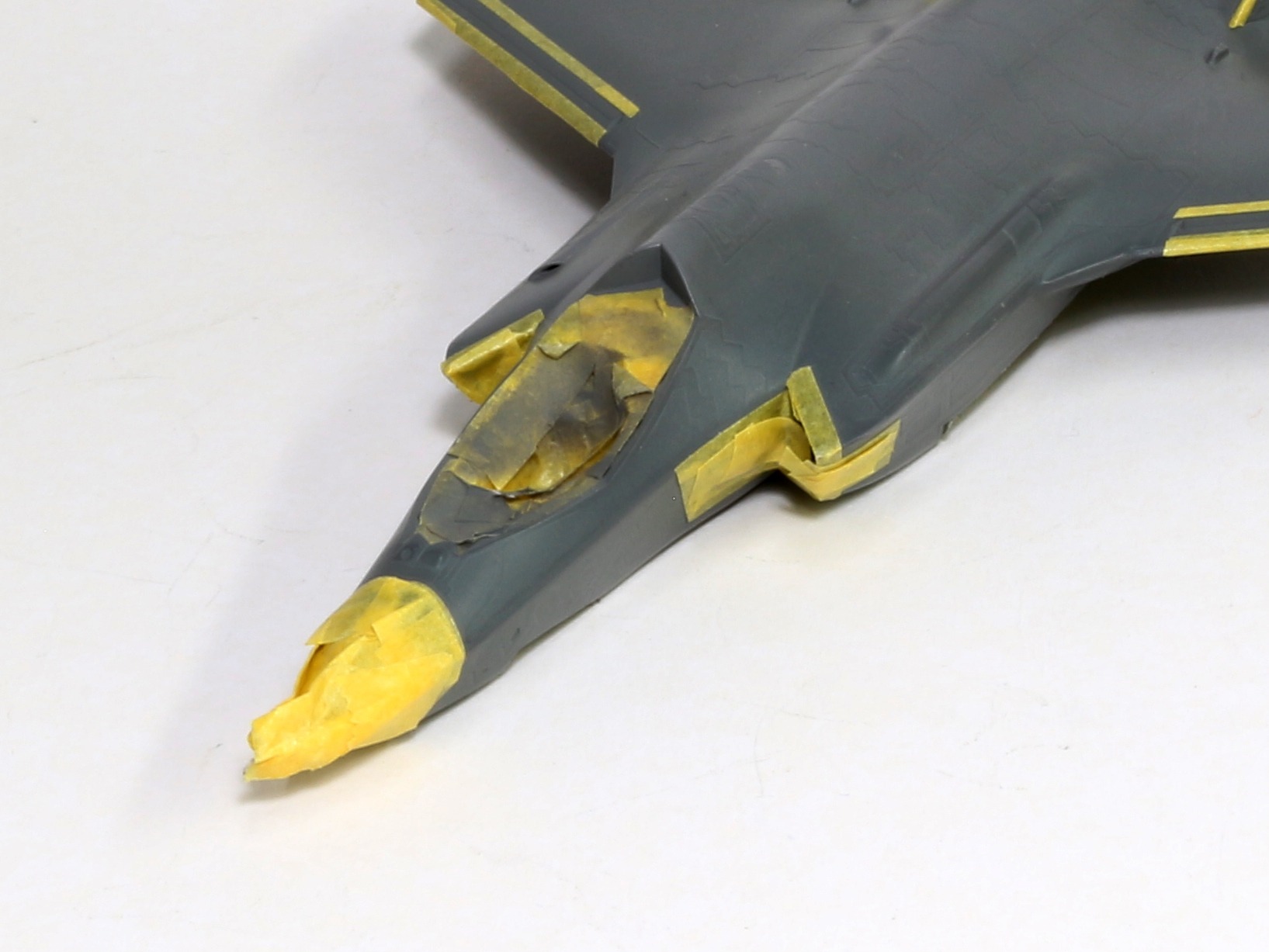 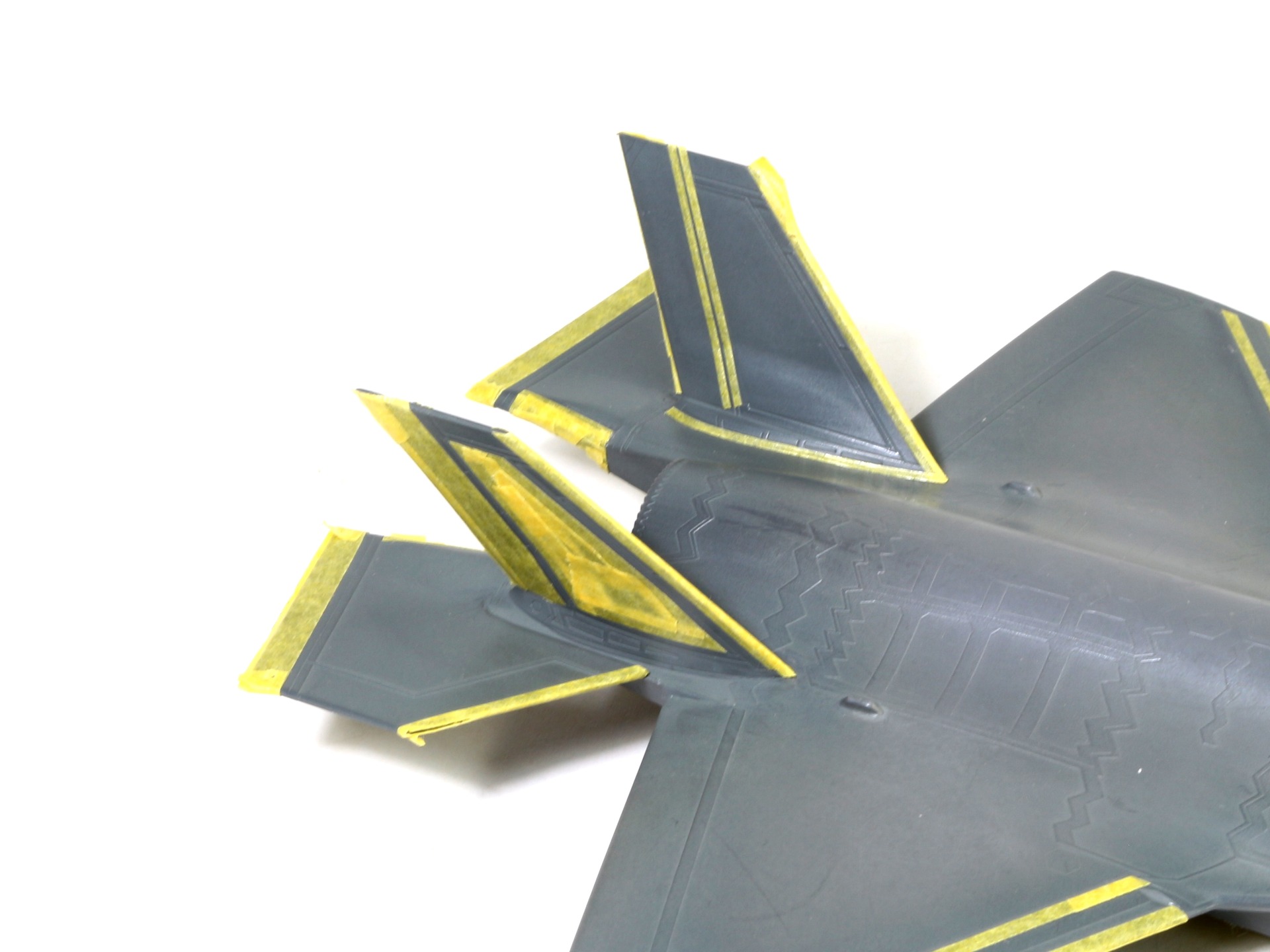 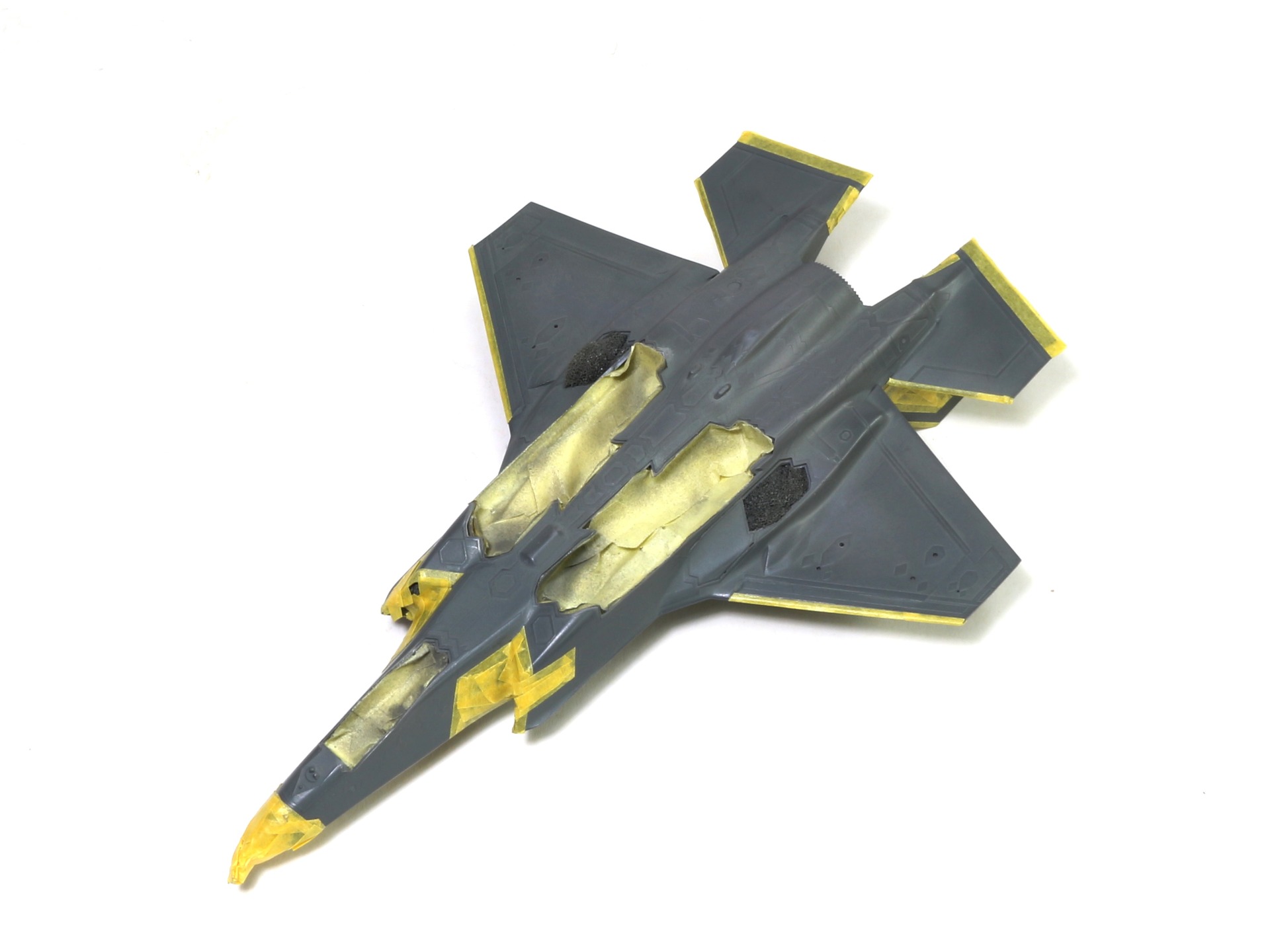 I attempted to weather my Adir by applying black oil paint around the various RAM areas atop the fuselage. To prevent the enamel paint from lifting due to the use of a turpentine-based wash, the model was first sprayed with a layer of Future Klear. The resulting effect was unrealistic giving the model an excessively weathered finish not seen of current, new production Adir airframes. I thought of scrapping the model due to its unrealistic finish being covered with Future Klear but took a chance and sprayed a lacquer thinner diluted wash of Humbrol 79 over the areas of excessive contrast. To my surprise, the enamel paint adhered to the Future Klear with no lifting or crazing of the acrylic clear coat below. The model was saved! Having achieved the contrast, I wanted and learning a new weathering blending technique, the model was sprayed with another layer of Future Klear needed for decal application. 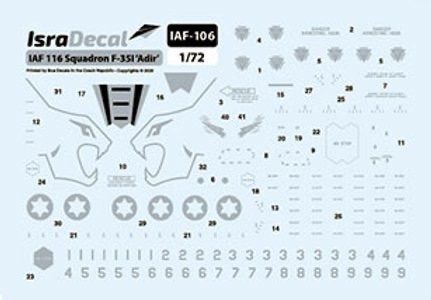 Decals for the "Lions of the South" squadron were obtained from the new IsraDecal sheet IAF-106. Kit stencils were used for all non-Israeli Air Force generic markings since the generic markings offered by IsraDecal are not sized for the Academy kit. The optional decal numbers appropriate for the non-contrasting RAM aircraft, such as Adir 930, are called out in the kit's Korean Air Force version markings. All decals were applied using Future Klear applied by brush underneath and above them.

The pre-painted AIM-120C AMRAAMs were positioned on their respective actuators and brass pins inserted through them both. The landing gear and bomb bay door hinges don't have locating recessed on the lower fuselage shell and are difficult to position and cement in place; patience and cyanoacrylate cement is required.

Wing pylon locating pins are wider than the lower wing locating holes, and which need to be enlarged prior to cement application. The pylon's triangular anti-sway flanges are thin and fragile so beware of their tendency to break off. After all the doors and external stores were cemented in place, using cyanoacrylate cement, the model was given a semi-matte clear coat mixed with equal parts of Future Klear and Tamiya Flat Base diluted for rapid drying with pharmaceutical alcohol.

Ra'anan Weiss of IsraDecal Publications for the new 116 squadron decals.